A 2-channel distortion that fulfills the specifications of bassist BOH.
The A channel is equipped with a special performance enhancing boost and two effect loops,
and an always engaged pre-amplifier.

To achieve the ideal sounds that BOH wanted we had to go beyond the basics of creating a mere signature model and create and refine a new professional device over a long period of time. A pedal that allows BOH to go through the wide range of genres of his playing wherever
he is, as well as providing a distortion sound. 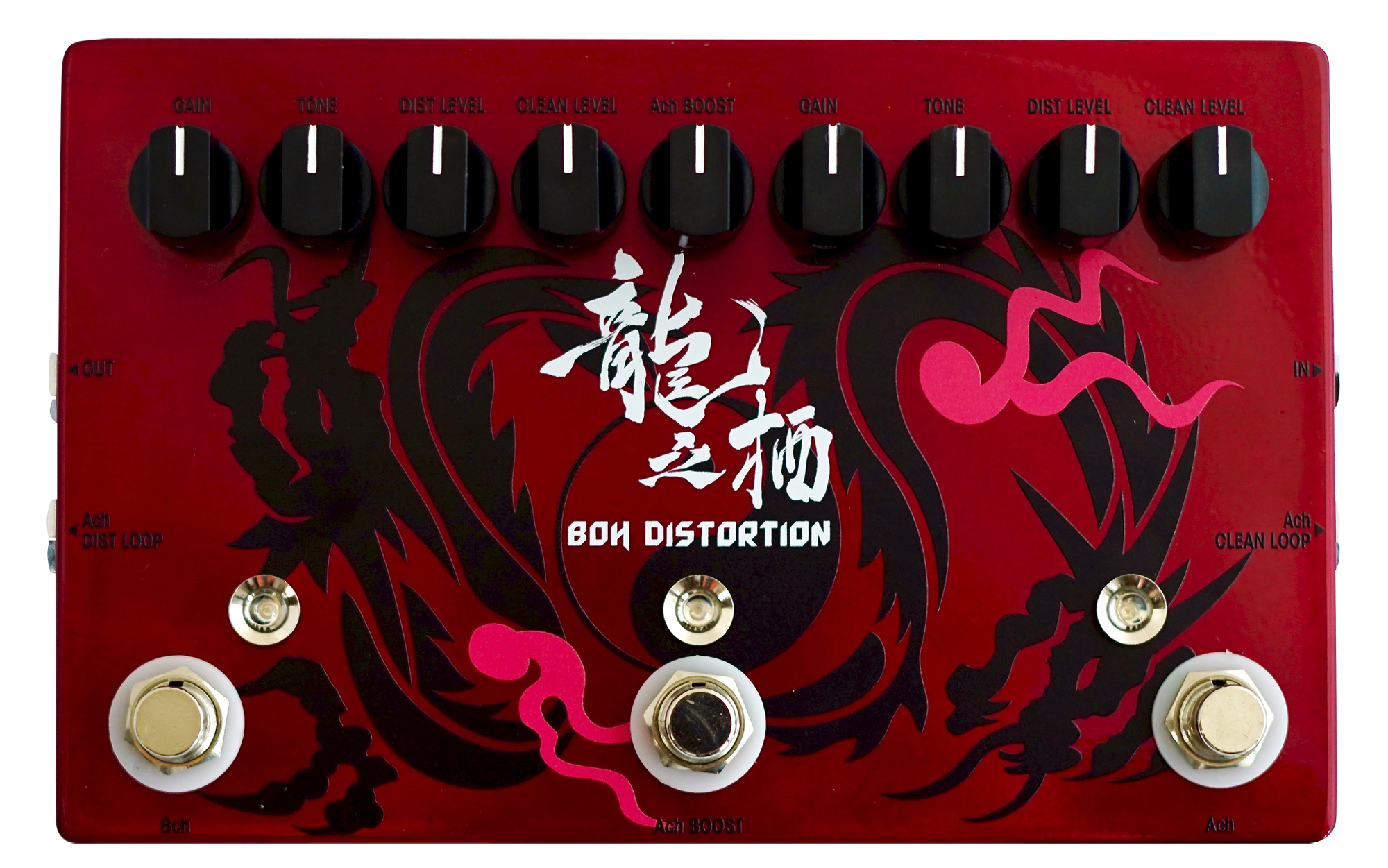 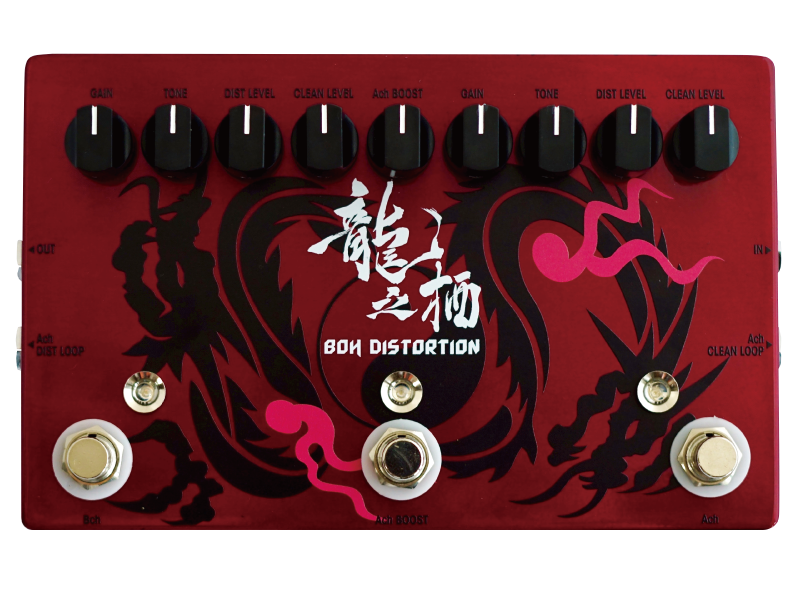 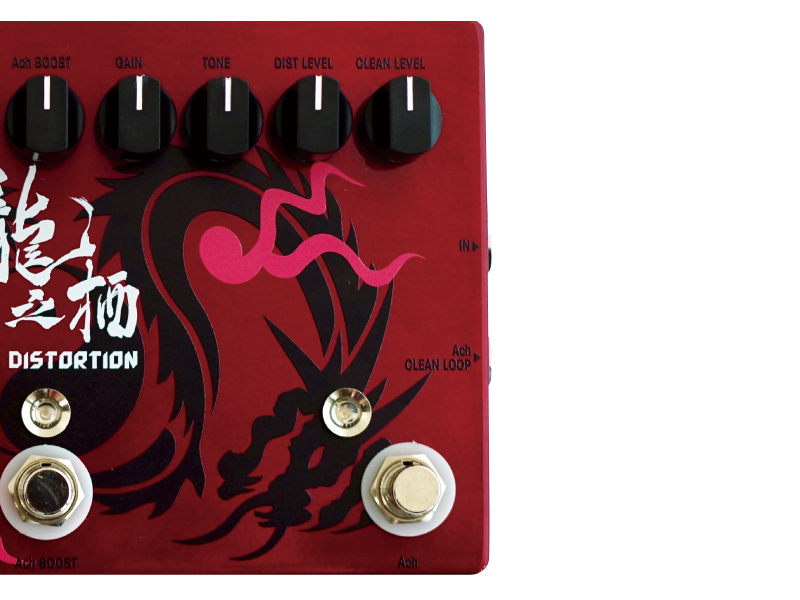 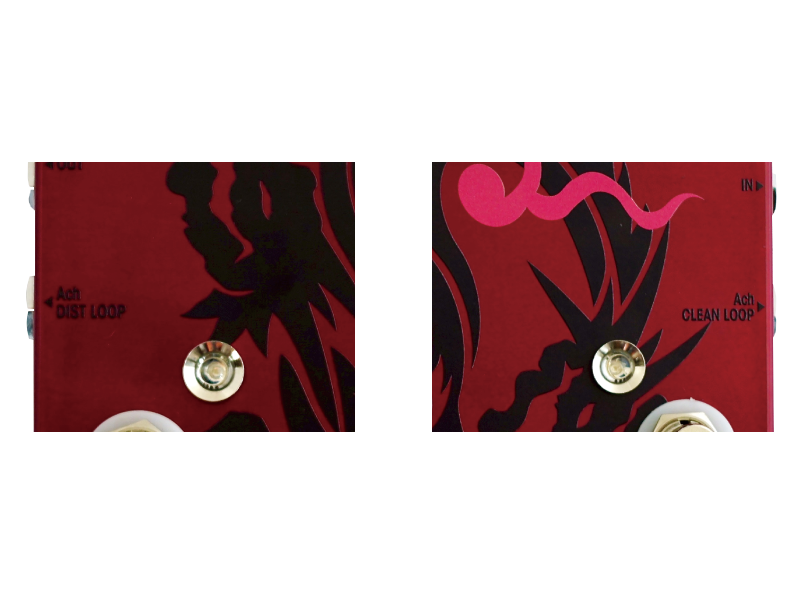 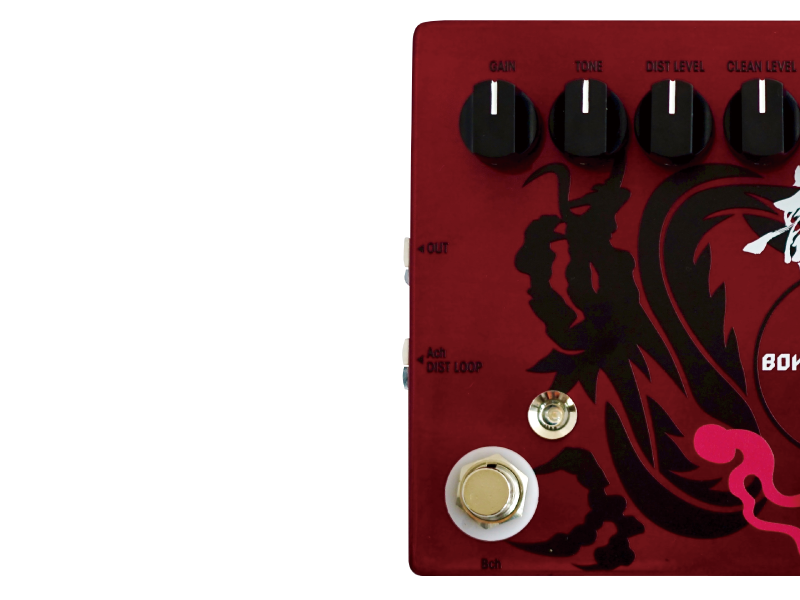 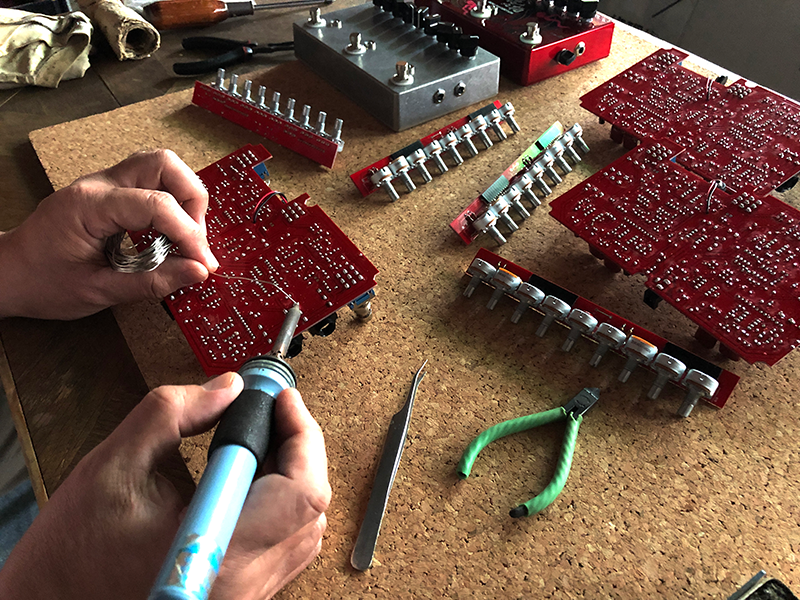 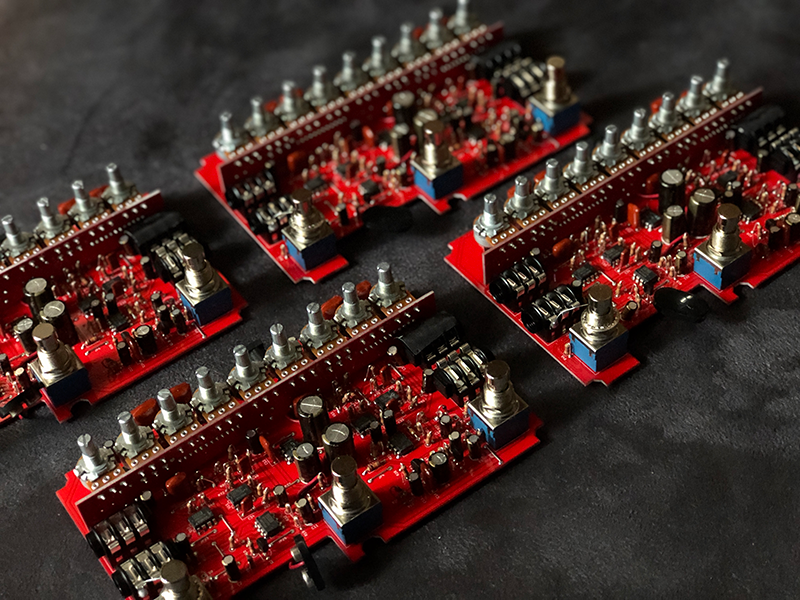 A 2-channel configuration with a booster in the A channel and B channel capable of
independent operation. Each channel can control the clean level and distortion level
independently. The clean sound meets the exacting levels demanded by BOH and reproduces
the exact original output from his bass. The ability to mix the clean and distorted sounds allows
for some powerful and unique sounds.

At the heart of this effect pedal, the A channel can be used as a pre-amplifier that is always on
as well as distorted. The A Channel Boost does not increase the volume, but is designed to
boost the harmonics component as if the knobs were maxed. As a result, it’s possible to
perform sounds that can only be done with this booster, such as feedback and super long
sustain.

The A Channel, which features the original bass sound, has a send/return for both clean and
distortion. An external effector can be connected to the A Channel clean sound (original sound)
and distorted sound (effect sound). Completely unique approaches to the A Channel are
possible, such as compressors and octavers for clean loop, and modulated effects for
distortion loop, or other effects connected in series. Connection is made with an insertion
cable (sold separately).

The B Channel is an independent drive channel that can operate independently, but the
importance of setting The A Channel as a separate boost is also a feature created by the
unique demands of BOH. Not just clean boosters that are faithful to the original sound, but also
high-quality drive sounds that can be boosted with a subtle distortion.

Q
(Demonstration) Please tell us some points when you’re making sounds with the bass.

A
Now with the A channel on, this is my routine setting. Here, only the clean tone is raised.
This is the same sound without any effect.
And now cut.
The volume of the bass and the volume of the CLEAN LEVEL are matched.
This is a setting where a component of distortion can be added . This is the distortion now
distorting the clean sound. Even if you play a nuanced phrase, it will not be buried,
There is still good clarity, for example, when you play a slap pull.
In this way, even if it is ON or OFF, you can apply distortion while producing a solid
combination.
Just to see, I don’t use this method, but let’s turn off only the clean sound.
It’s not like a bass sound, but this is very important.

Although it is distorted, it has the ability to let tone, attack, or graininess come out.

Q
(Demonstration) Tell us in more detail about the boost.

A
With the A channel boost, it’s assumed that it will be basically a fully open sound.
What happens is that by stepping on it, it will raise the harmonic component of the sound and
make it easier to produce a feedback.
For example, when demonstrating, only the A channel is engaged, and course I get a little
feedback, but it’s very high gain, and by stepping on Boost, you can make use of higher
frequencies without changing the volume. Also, stepping on the Boost will make the higher
sound more vivid and sustain longer.
This kind of distortion isn’t usually made for the bass – there are pedals that just make
feedback or get a dirty sound, but this allows you to really achieve those harmonics neatly.
Next, I use the B Channel as a booster to the A channel, with the current settings, you can
improve the distortion while clean boosting.
In this way, you can boost the whole thing while sustaining and adding a sense of distortion.
After that, as I did in the previous demo performance, but if I set the distortion knobs back to 0,
it can also be used as a clean booster. Since this is boosting only the CLEAN LEVEL, the A
channel sound is boosted as it is. In this way, it can be used fulfill different needs depending on
the situation.

How To USE Demonstration

Q
(Demonstration) Please tell us about the Send / Return loops.

A
These use insertion cables, a send/return cable that is divided into two plugs (sold separately).
If you want to apply an external effector only to the clean sound, or if you want to apply an
effector only to the distortion sound, you can do this through the separate loops. For example,
if you connect delays and octavers in series, the delay and octavers will be heavily applied to
the entire distorted sound, which may make it difficult to pick out phrases and the pitch.
With individual sends / returns, you can apply compression only to clean sound, or conversely
only the distorted sound, or wah or whammy, etc. – you can use it freely.
These effect loops are only used with the main A channel which is used as a preamp. I
basically use The B Channel for boosting, so I didn’t have a loop function there by design.

Q
Tell us about why you decided to make a signature effect pedal?

Q
What’s the most important thing about this pedal?

Q
How do you use each channel?

Because it has a tremendously high gain, if you turn on all three, it feeds back, I made it that
way, with the assumption that I will not use all three at the same time.
If you want to boost the sound created with the A channel, you can use it as a clean booster by
raising only the B channel clean level. As for how I use it, when I want to boost a bass solo etc,
while maintaining distortion with the A channel, I use the B channel as a clean boost.
Also, when I want to add a little more distortion,
the B channel is used as a fine adjustment via the DIST LEVEL and TONE control.

Q
Were there difficulties in development?

A
“With just this one effect pedal, it is possible to produce a distortion that can be applied to all
situations.”
I made it while talking with the producers effect maker quite closely. Altogether it took one year
for the concept, and one year for the production, and so more than two years.
It was particularly difficult to balance the timbre of distortion, the feeling of how the pitch
remains even when strongly distorted, and the absence of any strange compression, and the
ability to produce an attack properly.
There are lots of sounds that can be achieved with a single effector, or sounds that do not mix
clean and distortion. However, in my case, I really thought about how it would sound when
mixed with an ensemble. Especially, as a type of musician who goes on call and plays in
various sessions rather than just a single dedicated band, since the nature of the distortion has
to change from situation to situation, I have many memories of discussing with the maker
multiple times to make this possible with just this one effect.

Q
What are some key points about the design?

First of all, this red body really stands out, and so this product is already good (laughter)
This is amazing. Tokyo Effector really took the plunge – I didn’t thing an effect pedal of this
color would come out.

Regarding the name “BOH DISTORTION – ryu-no-sumika”. The reason I named it Ryu-no-
sumika was because I wanted to give it a Japanese name, and a traditional Japanese name.

I wanted to use Kanji instead of just an English name like “the BOH model” or “blach-blah
distortion”, but I didn’t choose the name just to have the appeal of “made in Japan”, rather I
wanted to create an atmosphere that makes me feel Japan.
After that, two distortions are consolidated into one, so there is also the consciousness of two
dragons, and dragons have long been a favorite and have been recognized as legendary and
sacred. This is all taken in to the design of the effector.

Q
Who do you want to use this effector?

A
“To those who want to cherish the sense of pitch, but also want distortion, yet want to maintain
the picking nuances.”
One of the characteristics of this effect pedal, since it’s a very fine distortion, you can actually
use it as a preamp, and as demonstrated in the video, it has a long sustain, does not erase the
attack, and takes an unprecedented approach, with it’s unique analog circuits. On top of that, it
is handmade by a craftsmen one by one.
Up to now most distortion pedals were not made for the needs of bass. If you play this, it is
immediately apparent that it is different from other distortions so far. This is a perfect distortion
for professionals as well as amateurs who want a distortion that doesn’t erase the picking
nuances. Please give it a try.

Q
How do you feel about finally having your hands on the finished product after two years?